Imagine looking out of an open door only to see the pure blue sky. It feels like there is nothing around you. You instantly get tunnel vision and stare into the void that is outside that door. You’re skydiving.

Lets face it, if you’re reading this post, you have an interest in jumping out of planes. It’s probably one of the many things on your bucket list. It’s definitely an experience that I’d recommend trying.

I often hear the excuse that it’s either too expensive or the person is scared. To me, it’s like ripping off a band-aid. You’re nervous before it happens, but when it does, you’re thankful that you did.

So if you’re even a little hesitant about making the jump, I’ve compiled my top 10 reasons why you should put aside your fears and make the jump. So lets get started!

It begins when you step into that plane and it starts to take off. You soon realize the only way down (ok well not really) is to jump out that door (again, not really as they won’t jump if you don’t want to..but you paid for it!). Once you leave that plane door, it all hits you. Your body doesn’t know what to do at first and it feels awesome. Once you realize you’re falling, it just feels like a lot of wind hitting you. It’s like a blowdryer rubbed with cheetah blood. It’s coming at you FAST!

2) It kickstarts your thrill seeking

Once you do skydiving, you realize that some of the other things you’ve feared in the past now seem attainable. What’s next? Bungee jumping? Running with the bulls? You bet! Once you overcome your fears, it becomes a thing of the past and your world opens up to you.

I remember talking to wing suit legend, Jeb Corliss, when doing my skydiving certification. He said that it’s more dangerous crossing the street then to skydive. I don’t know what statistic he was looking at, but I could believe it. There are a lot of factors when crossing a busy intersection and a lot of people are actually hit or get into car accidents. I’m not saying that skydiving isn’t dangerous, but it seems like there are less factors. If it’s a good day, all you have to do is pull that parachute. If something goes wrong, you have a backup. The parachute that I had also had a safety mechanism that automatically deployed the parachute if you don’t do it yourself after about 3,000 feet.

Me, Jeb Corliss and Tim.

4) You feel like you’re on the top of the world!

After that first jump, I felt like I could do anything. It kind of goes back to point #2. You stop thinking about everything else that is going on in your life and you just focus on that feeling. That feeling of taking flight! 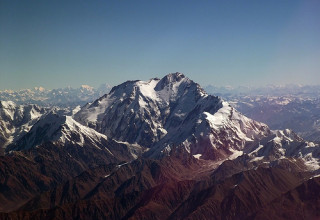