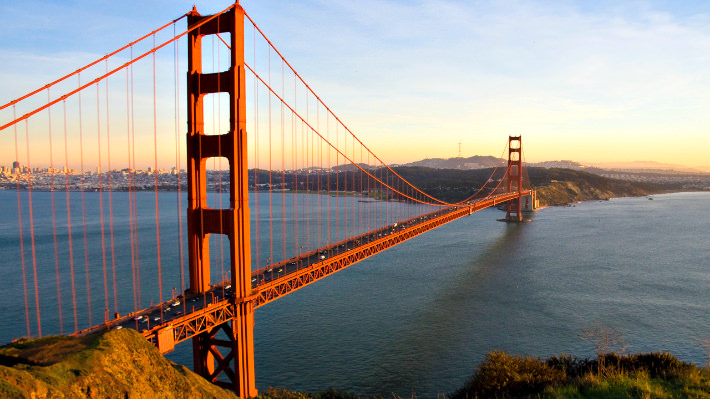 San Francisco is a mecca for bikers, with millions of trails, roads, and bike paths that lead bikers everywhere, from the coast to the redwoods and into the foothills of the mountains. While it would take years to bike every route in the Bay Area, these few stick out as the best way to start exploring the city with two wheels instead of four.

While some of San Francisco’s hills are best left to the trolley cars, there are plenty of scenic routes in the city that don’t include nearly vertical climbs for blocks at a time.  Starting at Golden Gate Park, ride the highway south to Fort Funston for a relatively easy ride that’s just under 5 miles and pretty flat. Fort Funston has plenty to explore and watch, from Level III hang gliding launch spots to sand dunes and plenty of great hiking trails.

Tilden Regional Park offers one of the best panoramic views of the city and the greater Bay area. Yes, it requires a bit of walking at the end to reach the final summit, but getting there includes a fantastic bike ride through the park. Start at Inspiration Point and bike along Nimitz Way; the trail is both paved and dirt, and can get a bit crowded on the weekends.

3. The Golden Gate Bridge to Sausalito

You can’t ask for a much more iconic introduction to San Francisco than by crossing the Golden Gate Bridge. Don’t let the Bay area traffic and the dizzying heights stop you from taking the bike on with two wheels instead of four; the Bridge is a popular bike destination and easy to navigate across. Start your journey at the Golden Gate Promenade, and then make your way to the west side of the bridge to join up with the bike path. Forget cycling the return trip, and instead continue on to Sausalito, from where you can hop on a ferry for a ride back to Pier 41.

Biking is the preferred method of travel on Valencia Street, so you’ll fit right in with the locals and the tourists that frequent the urban hub that has seen incredible revival over the past few decades. The street runs parallel to Mission Street, and is packed with bike racks, roomy bike paths, and even a few bike shops that provide everything from rentals to air compressors for stranded cyclists with a flat tire.

For a chance to get back into nature and be surrounded by some of the area’s natural beauty and landscapes, start at Portola Redwoods State Park. You can bike Haul Road down and back to Memorial County Park for a breathtaking ride through the redwoods. Haul Road is a gently packed dirt road, but it’s gentle enough for a hybrid bike.

The San Francisco Bay Trail is so massive in size that it isn’t even complete yet. Today you can still bike through almost 50 cities for over 340 miles of shoreline along some of California’s most scenic ocean wildlife scenery. The trail is well marked, well used, and easy to follow, with plenty of great stops for meals along the way. It also joins up with plenty of other trails, so you can hop on and off to create thousands of bike route possibilities.

Besides the Golden Gate Bridge, one of the best ways to view the Bay from bicycle is on Angel Island State Park, where you can bike the entire circumference of the island in just over 6 miles. The entire path is paved, and features only a few mild incline section, so it’s great for beginning cyclists or those looking for an easier intro into urban biking. You can easily get to the island by hopping on the Blue and Gold Fleet Ferry from Pier 41, which goes to the island multiple times a day, every day of the week.

If you’re in San Francisco over the weekend, head to Golden Gate Park on for the perfect Sunday afternoon bike ride. While the roads can be quite crowded the rest of the week, on Sundays traffic is limited to just a few streets and several of them are open only to pedestrians and bicycle traffic, making for a much more relaxing ride.  The park is one of the best urban parks in the country, and has an oasis like feel while still being close enough to bike to from other parts of the city. If you don’t have a bike of your own, the park offers several rental shops and businesses that rent out every kind of bike you could imagine.